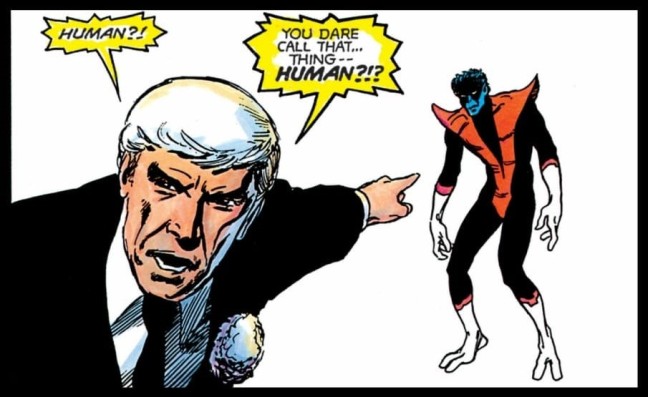 We all know about the collection Marvel Graphic Novels which appeared in the 80s as a reaction to that new wave of so-called intellectuals who claimed that comics were for children and wrongly called “graphic novels” to independent comics, scared of being called nerds if people found out they were comic readers. From that whole editorial line, there was a graphic novel that shone with its own light and today, 36 years later, is still the first answer from a big amount of fans when you ask them about their favorite comic: “X-Men: God loves, man kills” (1982), masterpiece of narrative by the legendary Chris Claremont with amazing art by Brent Anderson.

Marvel has always been a company tightly bound to the political field and with a strongly progressist ideology, from their first stories about Captain America fighting Nazis to the creation of a superhero team marginalized due to racial prejudices such as the X-Men, created as the perfect metaphor for social exclusion, who have ended up illustrating very critical stories about racism, homophobia and xenophobia. Nowadays we are more than used to Marvel superhero comics being excuses to talk about the political problems of the world –the Siege saga as a metaphor of the horrors of Bush administration and their attacks to the Middle East, the Secret Invasion saga to explore the theory that the real culprit of Islamic terrorism was Bush’s government itself, etc.–, but in the beginning they used to be way more subtle and restrained. Until Claremontarrived, of course.

Claremont landed in Marvel in 1975 and found that a failed series named X-Men, which supposedly talked about racism, was actually portrayed by five white American kids, which he decided to change. That’s how he gave birth to the first inclusive casting in history: an African woman, an Irish man, a Canadian, a German, a Jewish girl, a Japanese, a Native American and a Soviet guy who, unlike the ones portrayed to the date, never regretted or denied communism –which was important to show that other people’s cultures can be respected too. And in the early 80s, in the Ronald Reagan era, when fascism and racism were unleashed more than ever –except for maybe the present day-, when TV was infested with televangelists who used a fundamentalist exaltation of the Bible as an excuse to commit any xenophobic action, good old Chris realized the world needed a comic to raise awareness about the subject.

“God loves, man kills” is not a superhero comic. It’s a treaty about racism and religious fundamentalism. About the scurfy reactionary conservatism prevailing not only in the United States, but also in the rest of the world. And most of all, it’s a philosophical debate about the paradox of tolerance put forward by the philosopher Karl Popper (1902-1944), which tells us that if we tolerate an intolerant we are destroying true tolerance. Claremont speaks to us about the misrepresentation of the truth in the media by the spokespersons of fascism, about how easily the broad public can swallow any lie if that helps feed their fear and hate, about how the mass media rather generate morbid tension in order to earn money than to respect any kind of ethical principle.

The plot revolves around reverend William Stryker, a bigot racist

televangelist who, with no other power than his ability for demagoguery, harangues his followers to exterminate the “inferior” mutant race in the name of God and the Bible. Claremont creates here the most terrifying, spine-chilling supervillain we have ever seen in a comic. Because he is entirely real. Because he is not a mad man in a mask who uses his powers to take over the world or launches his murder robots to the streets. Because he’s just a TV demagogue with a great persuasiveness just like the ones we have in the real world. The scene with his TV speech gives us goosebumps due to its resemblance to some rightwing politicians and televangelists we’ve seen a thousand times encouraging hate and terror. We all have seen some Stryker in real life. And they are way more terrifying than a million Doctor Dooms.

It is crucial for this story to show the different points of view from the members of the protagonist team, from the innocence and optimism of the younger, more naive Shadowcat and Magik, the ones who suffer the most of the surprise and horror about what’s going on –it’s funny how Illyana could still be considered innocent and naïve at that time, now that she’s become one of the darkest, most bloodthirsty characters of the Marvel Universe– to the furious resignation of the oldest, most cynical ones, who had always suspected that a day like that would come, such as Wolverine, Storm or Magneto. 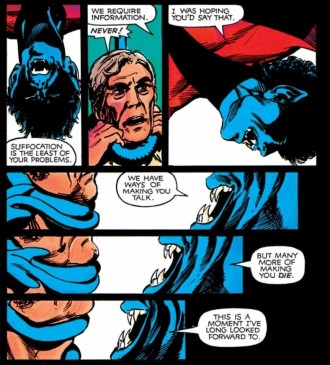 Even Xavier’s eternal faith in his own dream of peaceful coexistence totters, getting him to the point of fantasizing about joining Magneto, such is his disappointment with humankind. Nightcrawler and Shadowcat are strongly religiouscharacters –he a Christian, she a Jew– who are witnessing with impotence and frustration how people of their own faith use and twist it to boost a genocide akin to their interests. Kitty’s optimism is as desperate as Kurt’s blind faith and both of them will be cruelly tested. Kurt may be the pure, comprehensive good guy, but this time even he will reach the limits of his own humanity. 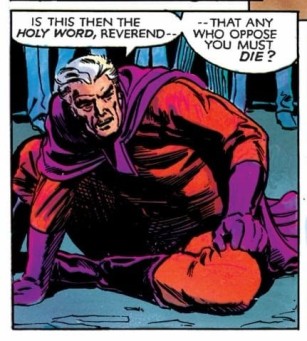 And to talk about humanity, Magneto is the one. He’s shown in this comic –and in most of them since then– as the most human, complex and full of shades of them all. Magneto is the character put there to tell the hard truth that no one wants to hear, to tell us that the good guys are too good and that we must never tolerate the intolerant, that a murderous racist doesn’t deserve freedom of speech and that, when it comes to fascism and annihilation of those who are or think different, equidistance is never an acceptable choice. After all, from the very beginning of the comic we witness these religious fanatics murdering children in cold blood in the name of their ideology, to make clear the kind of monsters they are. Magneto himself tells he’s already lived through a “genocide in the name of God” and he’s gonna do everything in his power to prevent it from happening again.

Though the central subject of the story is said religious fanaticism as an excuse for racism and xenophobia, Claremont is Claremont, so he takes the opportunity to open many juicy philosophical debates about a lot of social subjects –you could almost say of every three sentences, one can give rise to a whole philosophy book or a special episode of any talk show where gin and tonic rain all over the place. One must especially highlight Magneto’s brilliant speech about freedom and dictatorships, near the end of the comic. It’s impeccable, it’s perfect. 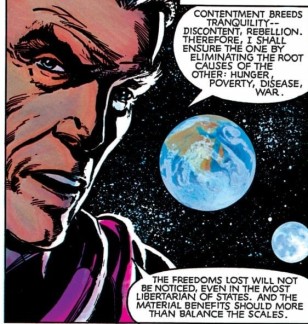 Brent Anderson’s art is the one distinctive of the Marvel Graphic Novels collection, way more careful, more “serious and adult” than the usual in superhero comics –at least at that time-, following the style used by Starlin in “The death of Captain Marvel” or Mike Mignola in “Doctor Strange & Doctor Doom: Triumph and torment”. It shows a much more detailed stroke, uses a lot of chiaroscuro in a noirstyle –and all things said, I don’t think the impressive physical resemblance between William Stryker and Charlton Heston is the result of chance… ahem. 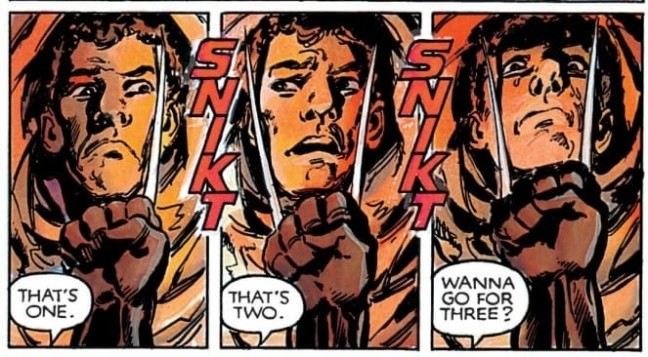 “God loves, man kills” is a work of worship recommended not only to comic lovers but also to any reader interested in political, ethical and philosophical debates about freedom and its limits. It tells us that in this life nothing is certain, there’s no irrefutable truth, except maybe that Magneto was right and that Chris Claremont is God.

This review was originally published in the Spanish website Batseñales. Go visit them!